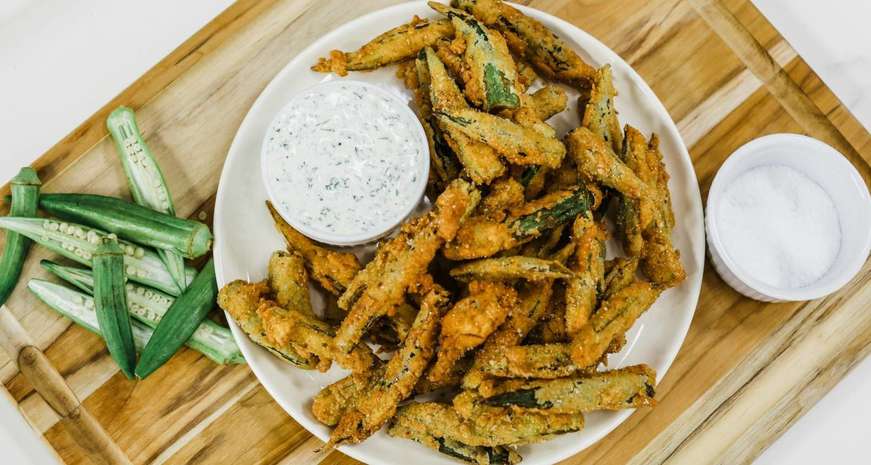 Okra is just one of those vegetables that people have strong reactions to. Due to its slimy texture, a lot of people are turned off by this vegetable. Typically either you love it — or you totally hate it. But there are plenty of recipes that'll convert even the biggest okra skeptics.

The vegetable is a part of the mallow family and, according to Food Reference, closely related to hibiscus flowers, cotton and hollyhock. Over the years, okra has been known as gombo, bhindi, Lady Fingers and bamia in various cultures that use it in their cooking. These 12 recipes make the best use of this controversal vegetable.

Fried Okra with Pickle Aioli
If texture is your main qualm with okra, this fried appetizer might be one to try. Made with hot sauce, Old Bay seasoning and buttermilk, this crunchy snack will have everyone reaching for more. Pro tip: cutting the okra lengthwise brings a heartier mouthfeel than the more traditional slices.  And the brightness of the pickle aioli adds some much-needed acidity to the savory appetizer.
Get the recipe 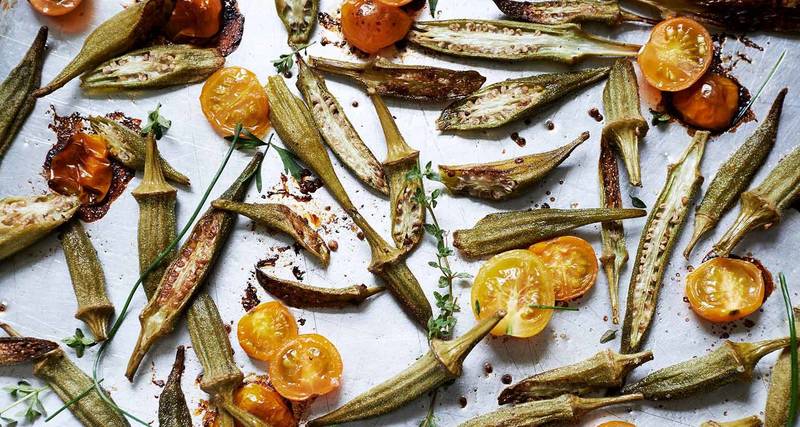 Anne Byrn's Roasted Okra and Tomatoes
There’s no need, however, to bread and fry okra as they pile into season. Bring their true flavor to life by slicing the vegetables lengthwise, into thirds or however you like, then tossing them with olive oil and a small pinch of salt, and roasting them on a sheet pan at 400 degrees until browned and tender.
Get the recipe

Virginia Willis' Grilled Okra
Virginia Willis likes okra every which way — raw, boiled, steamed, fried — you name it, she loves it. Grilled or broiled okra is a revelation. Many recipes suggest soaking bamboo skewers in water to use on the grill. This never seems to work well enough for us, and they always burn to a crisp. Our suggestion is to buy some stainless-steel skewers and be done with it.
Get the recipe 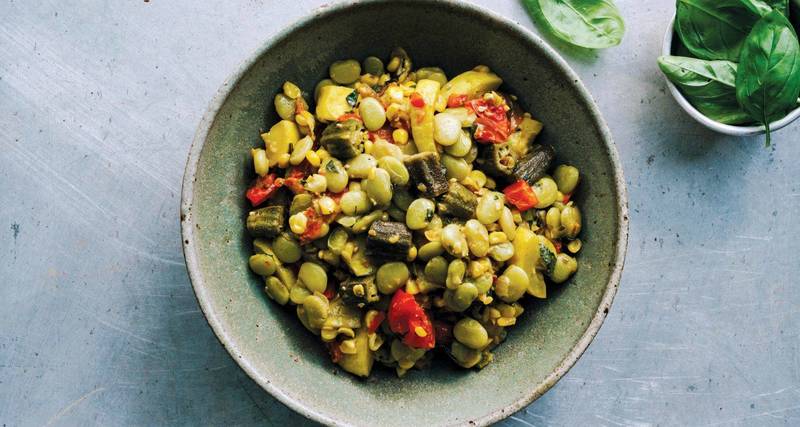 Succotash from "Southern from Scratch"
Are you even a Southerner if you don't either know how to make or love succotash? This veritable classic is a year round side dish that everyone loves. This recipe by Ashley English calls for fresh lima beans, crispy bacon, yellow summer squash and, of course, okra. Whether you serve this as a side dish or bring it to a summer barbecue, be prepared for it to be the star of the show.
Get the recipe

Anne Byrn's Summer Tomato-Vegetable Soup
This easy, adaptable vegetable soup recipe from Anne Byrn makes the most of a late summer Southern garden. Between the pounds of tomatoes and assorted just-picked vegetables, it is bright and cheery, but still comforting in the way that all good soups should be. Beyond the tomato base, this soup uses okra as a hearty vegetable as well as a thickener. Make sure to cook extra — this soup freezes well for up to six months.
Get the recipe 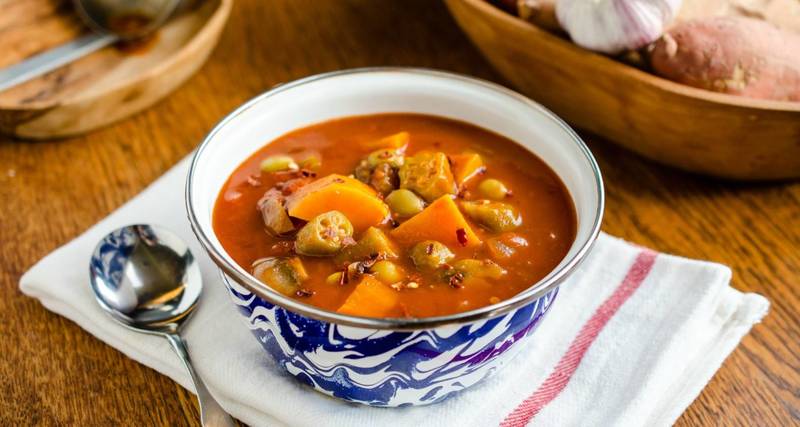 Virginia Willis' Vegan Vegetable Soup
This vegan vegetarian soup from Virginia Willis doesn't require hours of simmering ham bones or pots of homemade vegetable stock. It is what is ingloriously referred to in the parlance of food writers as a “dump-and-stir” — but absolutely packed with flavor. (The secret is a shot of umami-packed miso.) And, like Byrn's soup above, makes good use of okra's thickening power to add a lucious texture.
Get the recipe

One-Pot Carolina Chicken Bog
Originating around Myrtle Beach, South Carolina, chicken bog is a distant cousin to chicken purloo (or pilaf), which consists of pulled chicken cooked together with rice and sausage. The term “bog” reflects the moisture level of the dish, as it is slightly soupier or “boggier” than a traditional purloo. And our purloo isn't a purloo unless it includes a fair amount of okra in with the rice. Don't fret, though; anyone who still isn't convinced by this veg will surely enjoy it in and among the chicken and rice.
Get the recipe 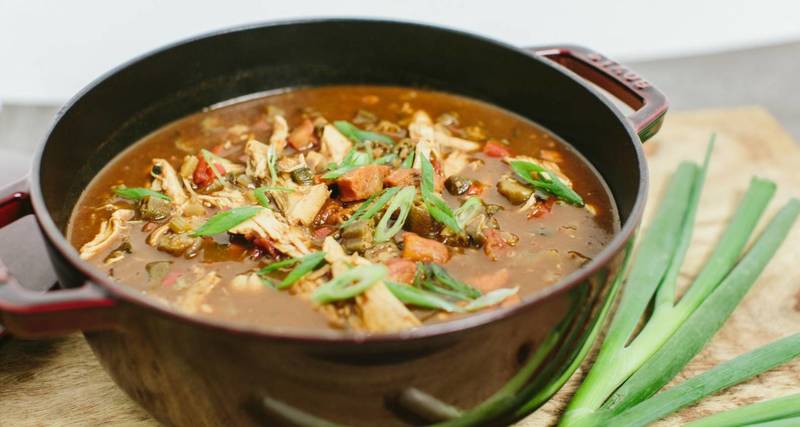 Chicken and Andouille Sausage Gumbo
This classic Cajun-style gumbo gets a spicy hit from andouille sausage and heft from pulled rotisserie chicken. But the winning ingredient? That okra, which makes an appearance here for both flavor and thickening power. We've also included a classic dark roux, which, we admit, takes both time and patience. (It's totally worth it.) One final hint for excellent gumbo? Use poblano peppers instead of green bells in the trinity for greater depth of flavor.
Get the recipe

Charred Okra with Bacon Vinaigrette
Who doesn't love the idea of charred okra with the smoky saltness of bacon? Thankfully this thoroughly Southern vegetable dish, which is tossed with a decadent bacon vinaigrette and topped with even more bacon, creates a crunchy and indulgent side dish that the whole family will love.
Get the recipe 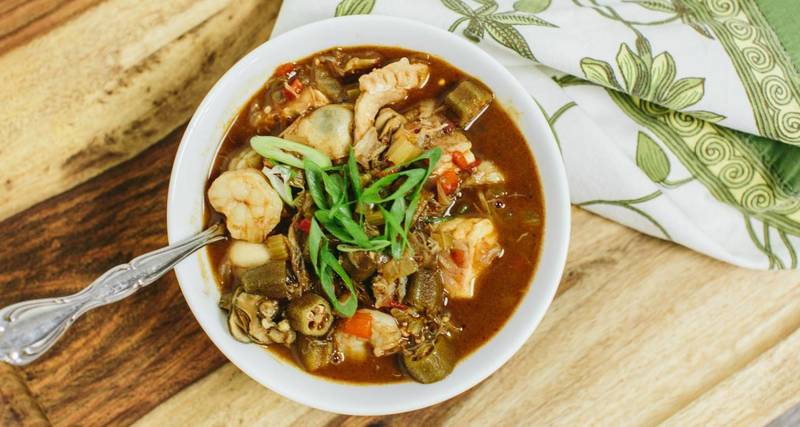 Seafood Gumbo
Once you've mastered chicken and sausage gumbo, try your hand at its briny cousin, seafood gumbo, chock full of just about anything you can pull of of the Gulf of Mexico. Here, okra plays even more of a critical role as an earthy counterpoint to all of that briny seafood.
Get the recipe

Virginia Willis' Grilled Gumbo
In this recipe, Virginia Willis brings gumbo outdoors, with grilled chicken, succulent shrimp and spicy andouille sausage teaming up with sweet onions, peppers, tomatoes and okra. It's a delicious dish that tastes like gumbo but doesn’t take hours to cook. This gumbo is easy, quick and delicious, and we guarantee it'll knock your socks off.
Get the recipe 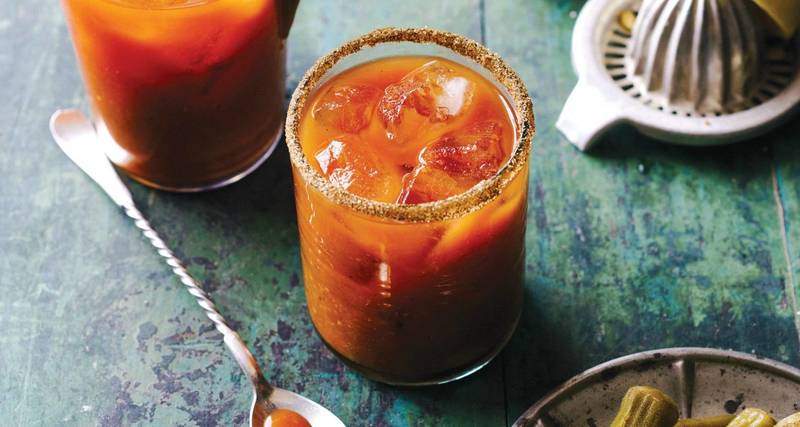 Spicy Bloody Mary with Pickled Okra from "Southern from Scratch"
Bloody mary's are a brunch favorite where the toppings are almost as important as what's in the glass. Here pickled okra brined in pickling salts, dill and white vinegar are placed on top of this spicy cocktail to take it to another level.
Get the recipe