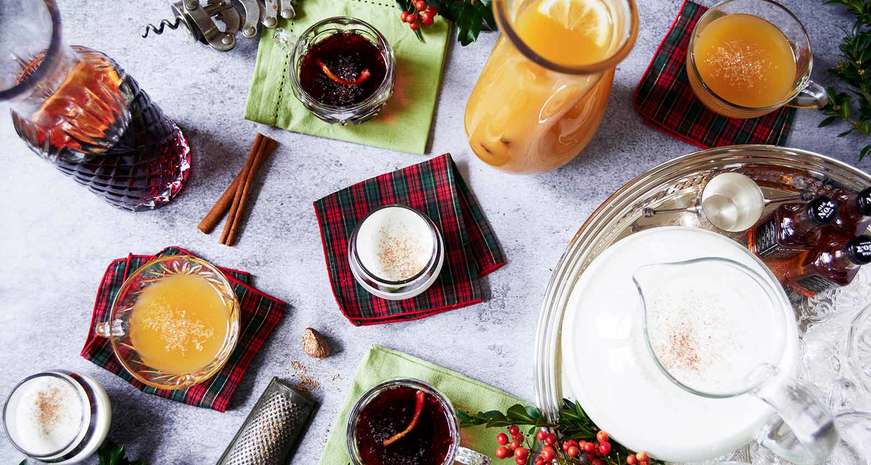 Taste of a Place: It's time for holiday punch

Nothing says holiday party better than a punch bowl filled with your favorite, festive libation.

Sure, a wreath on the door, candles flickering and a fire in the fireplace are all welcoming. But that punch bowl and its contents have the power to bring together everyone in the room. Even the party's speechless, most-introverted and frightfully uncomfortable relax at the punch bowl. You don't have to make polite conversation. Just ladle yourself a cup and find something to nibble on; before long, you're happy to be there.

When I think of punch in the South, I think of Savannah's famous, or should I say "infamous," Chatham Artillery Punch. According to Savannah historian and author Damon Lee Fowler, this punch was "invented” in the 1840s by the Chatham Artillery, a volunteer militia, to honor their rivals, The Republican Blues. And Fowler adds that it's really a "ramped up version of Regent’s Punch, which George IV made popular when he was Prince Regent in the late 18th Century."

Regent's Punch? What's that? I looked to British cookbook author Eliza Leslie for a quick tutorial. According to her 1840 book, Directions for Cookery in its Various Branches, here is how one made a proper Regent's Punch:

"Take four large lemons; roll them on the table to make them more juicy, and then pare them as thin as possible. Cut out all the pulp, and throw away the seeds and the white part of the rind. Put the yellow rind and the pulp into a pint of boiling water with two tea-spoonfuls of raw green tea of the best sort. Let all boil together about ten minutes. Then strain it through linen, and stir in a pound of powdered loaf-sugar and a bottle of champagne, or of any liquor suitable for punch. Set it again over the fire, and when just ready to boil, remove it, and pour it into a china bowl or pitcher, to be sent round in glasses."

But somewhere along the way, the Chatham version of that punch got a lot stronger. In Savannah Style, the Junior League of Savannah's cookbook, it says the punch was originally made in ice-filled horse buckets, into which you placed sugar, lemon juice, and a quart each of brandy, whisky and rum. The buckets were then topped off with Champagne and the recipe was revised, at some point, to include green tea.

My longtime Savannah friend Martha Giddens Nesbit, former food editor of the Savannah Morning News, recalls Chatham Artillery Punch all too vividly: "I can tell you that as a young food editor, I was invited to a big event at the Desoto Hilton Hotel, where Chatham Artillery Punch was served," Nesbit reminisced. "It tastes like old-fashioned Sunday afternoon punch and you don't know the damage it has done to your nervous system until it too late and you are wobbling around looking for some place to sit down."

Certainly a punch to remember. Makes you wonder if the Chatham Artillery was trying to honor their rivals or put them out for the evening, or if the 1840s tolerance for alcohol was a whole lot higher.

History Meets the Present in the Punch Cup 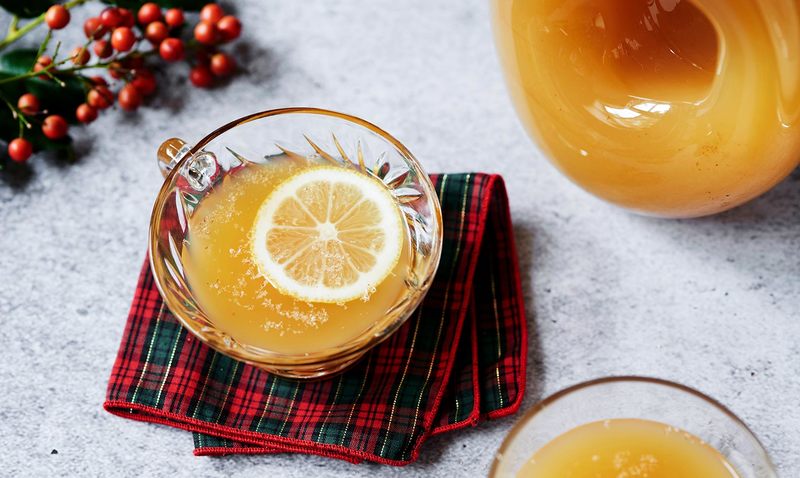 Travel back in time and you'll discover the punch bowl was an essential piece of equipment at early American gatherings.

Rum flowed through our country. And in the right circles, citrus and pineapple were signs of wealth. So if you were going to put on a show for your guests and let everyone know you were successful in business or trade, you might serve a fruited punch in a grand silver punch bowl. But let's face it, these early punches, by our standards, were lethal.

Browse through your favorite Southern cookbooks and you will find a slew of rum punches, eggnogs and wassail recipes. Many have been Puritanized — the alcohol removed or reduced from the original. And it's probably a good thing because if you served the old recipes to your holidays guests today, the party would get drunk very quickly. Not to sound like a prude, but what was acceptable a century and a half ago wouldn't be taken well today. And as a holiday host, you don't want the crowd to be "punch drunk."

It's possible to imbue the Dickens Christmas spirit at your party and still include the non-drinkers, too. Nashville photographer Danielle Atkins had a great idea — make the punch, and then serve the booze to the side.

Today I offer three recipes for modern-yet-historic punches for your holiday get-togethers. The first is a holiday rum punch, a nod to Chatham Artillery punch. It's fruity and festive, and you can make it without alcohol if you like.

Save time and begin with a pre-made tea punch, and add rum and spices, or use a spiced rum. Pour over a block of ice into a large serving or punch bowl. How to make a block of ice? Pour water into an aluminum ring mold pan or Bundt cake pan. Add slices of lemons and oranges, fresh cranberries and anything edible to make it festive. Place in the freezer overnight to harden.

Then, on the day of the party, taste your tea punch. If more flavorings are needed, add cinnamon, a dash of cloves and possibly allspice. Cover and chill, then just before the party starts, stir the rum into the tea punch mixture. And when ready to serve, unmold the ice block into the punch bowl. Pour the tea punch and rum mixture into the bowl, and give it a good stir. And of course, taste it too! 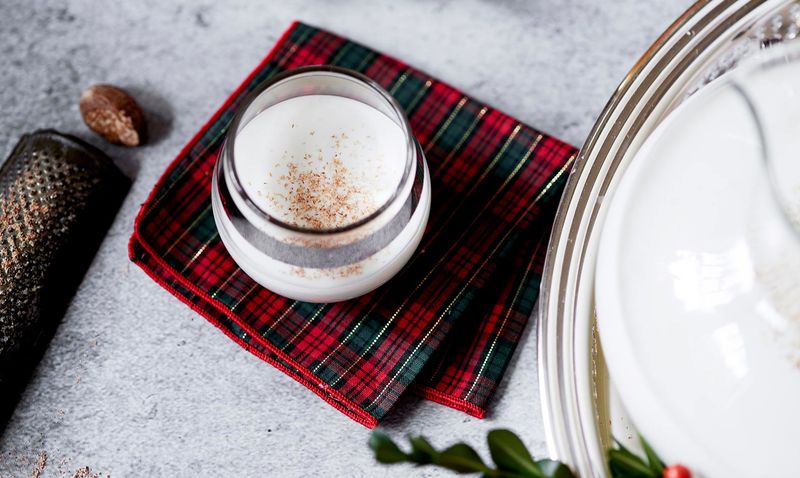 Old punch recipes show us the deep connection to British recipes in the South. None is more British than eggnog, and the first reference to it was in 1796 in Philadelphia, where it was served for breakfast.

According to the Oxford Encyclopedia of Food and Drink in America, American cookbooks shared eggnog recipes that called for brandy, rum and bourbon by the mid-1800s, and they were always sprinkled with nutmeg.

There were two eggnog consistencies: smooth and thin enough to drink, or frothy and thick enough to eat with a spoon. In the older recipes the egg whites and yolks are separated. The whites are beaten in one bowl, and cream was beat in another. The booze was added to the yolks, where it was believed to "cook" the egg yolk. Back then, people didn't worry about raw eggs and the risk of salmonella. Today, you can buy pasteurized eggs, which are perfect for making eggnog.

Not to be confused with "milk punch," a New Orleans boozy milk beverage served cold as a hangover cure, eggnog was festive. It has always been served at Christmas or New Year's, in cut-glass cups, and ladled out of a cut-glass or silver punch bowl. Or it was poured into tall glasses, to be eaten with iced tea spoons. The recipe I share is adapted from Eugene Walter of Alabama, and it is similar to my husband's family's recipe. 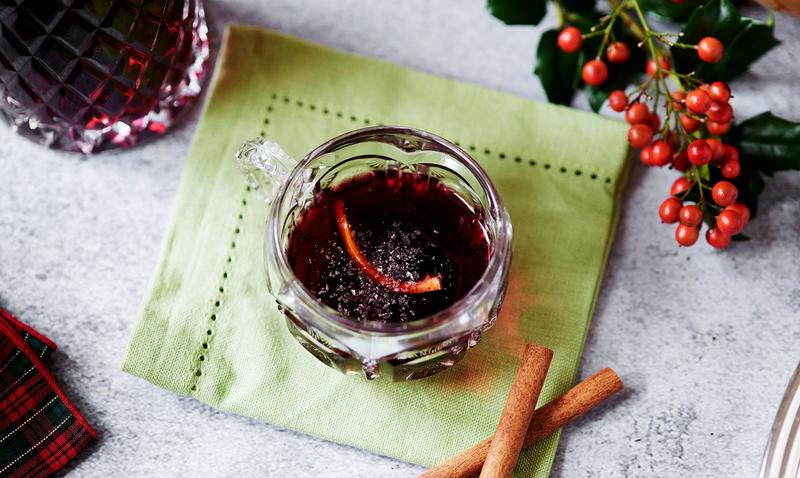 Lastly, Hot Spiced Wine is a quick and tasty way to turn a simple bottle of red wine on your shelf into a holiday punch. Let the mulling spices perfume the orange juice and water, and then add the red wine. Heat, but don't boil. And while the rum punch and eggnog are suited for the punch bowl, this hot mulled wine is best served from thermal carafes or family-style, from a pretty stockpot on the stove. Enjoy!

Instructions
In a large punch bowl, combine the tea punch, cinnamon sticks, cloves and allspice. Let sit in the fridge or at room temperature until the spices have infused the punch, up to 3 hours. Stir in the rum, taste, and add more if desired. Ladle into cups and serve.

Instructions
Place the egg yolks in a large bowl and beat with an electric mixer on medium-low speed until the yolks are well-combined and begin to lighten. Gradually beat in half of the sugar. While the mixer is running, slowly pour in the bourbon and rum.

Place the egg whites in a second large bowl, and with clean beaters, beat on high speed until the whites come to soft peaks, about 3 minutes. Gradually add the remaining sugar, and beat until stiff peaks form, about more 2 minutes.

Place the cream in a third, chilled large bowl and with clean beaters, beat on high speed until whipped, about 2 minutes. Fold the egg whites into the whipped cream, and then fold the egg white mixture into the egg yolk mixture. If you want to thin the eggnog, add a little milk. Sprinkle with freshly grated nutmeg just before serving.

Instructions
Place the orange juice and water in a large saucepan and stir in the honey, lemon zest, cinnamon and nutmeg. Bring to a boil, then reduce the heat to low and simmer until the flavors have melded, about 3 minutes. Turn off the heat, and stir in the wine. Serve immediately, in punch glasses topped with lemon slices, or let cool and reheat gently before serving.

Taste of a Place

Taste of a Place