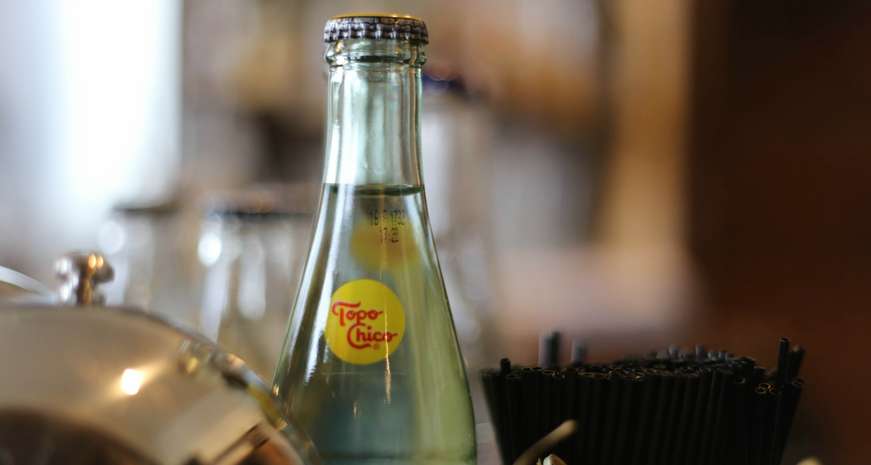 Topo Chico sparkling water, the winner of our sparkling water cocktail showdown and a favorite beverage across both Mexico and Texas, is being acquired by Atlanta-based Coca-Cola, according to FoodBev Media.

The deal is worth $220 million, reports BuzzFeed. And while it may come as a shock to brand loyalilsts, Coca-Cola actually has a long history of working with Topo Chico. In fact, the first bottle of Coca-Cola in Mexico was bottled at a Topo Chico factory in the 1920s, according to FoodBev Media. Coca-Cola's second-largest bottling partner in Latin America, Arca Continental, has also bottled and distributed Topo Chico for three decades.

Topo Chico, which translates to "little mole," is named after the mole-shaped mountian next to the aquifer from which the water comes. It has been bottled since 1895, and the beverage company was founded 13 years later. The brand was introduced to the United States in 1987, and has recently surged in popularity in the Southeast and Texas, where it accounts for approximately 70 percent of the brand's total U.S. sales. Its idolization among millennials has inspired the hashtag #topolife and many, many Instagram photos.

Coca-Cola's acquistion of the company adds one more brand to its small but growing coterie of unsweetened sparkling waters: Dasani Sparkling and Glacéau Smartwater. Matt Hughes, vice-president of emerging brands and incubation at Coca-Cola's Venturing & Emerging Brands unit, told FoodBev Media: “As we accelerate our evolution to a total beverage company, we’re investing in brands that are on trend. Topo Chico is a fast-growing brand with a lot of passion behind it and growth runway ahead. ... Our goal now is to extend its reach while preserving its heritage.”

Translation: You'll soon be able to find the water in many new stores acrosss the country.

However, many Topo Chico fans are, we'll say, more than displeased, and they are sharing their disappointment on Twitter. (Many such tweets are not appropriate for publication on this website.)

If @CocaCola puts my Topo in a aluminum can to compete with dang La Croix I swear I'll lose my mind.

Coca Cola is buying Topo Chico. As if this day could get any worse.

On the other hand, there may be an upside:

1) More availability
2) Hipsters will decide it's too mainstream now, leave more for rest of us

Still, as long as the formula stays the same, we'll still declare Topo Chico the winner of every cocktail mixing contest.

Get the recipe for our Topo Chico Paloma