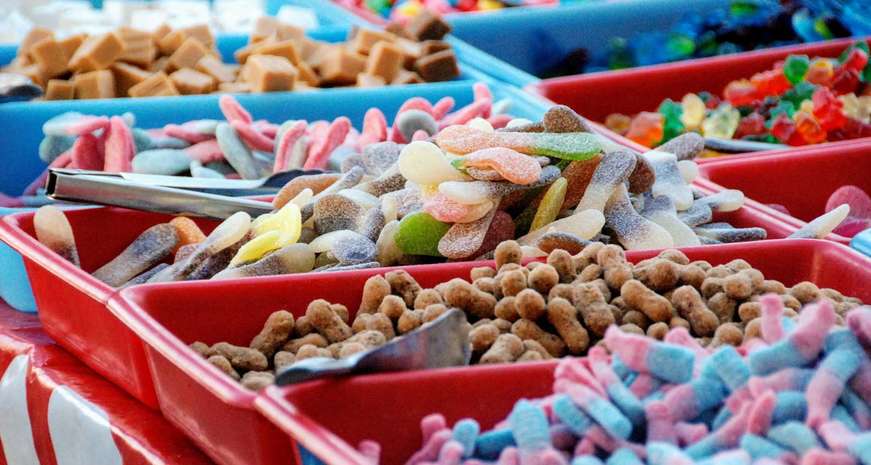 Whether you like fruity, nutty or chocolate candy, Chef Jeffrey Gardner has the perfect wine to pair.

With another Halloween on the horizon, you may anticipate (based on experience) that your young trick-or-treaters will bring home enough candy to feed a small army. Perhaps you already know that you bought too much for the kids in your neighborhood (maybe on purpose?) and are sitting on a bounty of sugary surplus. If either scenario rings true (or you’re just a fan of candy), the daunting task of consuming your Halloween bounty may call for an adult beverage if you have some kid-free time.

Candy comes in many different styles and flavor profiles, and we’ll highlight a few of the more common varieties to pair with some of our favorite wines. Halloween is fun for adults, too!

Sour Patch Kids, Skittles, Starburst and other fruity candies: Sweet whites
Many of your fruit-flavored candies bring some initial tartness, followed by a healthy wallop of sweetness. Look for an aromatic wine with notes of ripe fruit. Off-dry Riesling is probably the best bet here, as the flavor spectrum in most Rieslings can range from ripe green apple and apricot to tart Meyer lemon, making it versatile enough to pair well with a wide variety of fruity candies. Gewurtztraminer and Müller-Thurgau would also be excellent choices here, but riesling is likely your most readily accessible option. In a similar vein, you could also look for fizzier wines to go along with your Nerds, Swedish Fish, or even candy corn. Prosecco tends to be sweeter than Champagne or cava, and would hold its own against the candy; however, a Moscato d’Asti packs even more sweetness with lighter bubbles, making for a less jarring juxtaposition.

Almond Joy, Reese’s Peanut Butter Cups, Butterfinger: Fortified wines, part 1
Think of this section as candy with a creamy filling coated in a thin veneer of chocolate. Warm nutty and coconut flavors love to be paired with wines that amplify their nuttiness and result in an almost bourbon-like flavor. To achieve this, look for something like a dry sherry or marsala. While those flavors may seem more worthy of a chicken with pan sauce, wines like these start off dry, with the fortification process taking place after fermentation is complete. When paired with sherry and marsala, candy bars with peanut butter bring out this raisin jam-like quality in the wines — think of an awesome PB&J. If dessert wines aren’t your thing, look for a creamy white wine, such as a buttery chardonnay, marsanne or roussane. Having the center or filling of the candy more dominant than the chocolate ensures that the wine never comes off as too sour, and the hang time of the wine matches well with the richness of the candy.

Chocolate bars, Snickers, Milky Way, Twix, Mr. Goodbar, etc: Fortified wines, part 2
You may be asking yourself, “What about red wine with my Halloween candy?” While some bigger reds, such as a late harvest zinfandel can hold their own against chocolatey candy, the unfortunate truth is that chocolate, which can also be tannic, can make many red wines taste too acidic. The candy bars with caramel, roasted nuts or even 100% chocolate need a sweeter fortified wine, such as a ruby or tawny port. Unlike sherry and marsala, port wine is fortified in the middle of the fermentation process, leading to much more residual sugar in the finished wine. As a result, port — especially tawny port — carries these deep, nutty, caramel notes that beg to be paired with rich chocolate confections. Another fantastic, almost underrated choice would be Madeira: coastal Morocco’s answer to Portugal’s famed port wine. Unlike most other fortified wines, Madeira is both heated and aged, leading to a robust wine with a lengthy shelf life. Many people feel that Madeira is an overall smoother drinking wine than a rich port wine, and the high acidity makes it a very food-friendly accompaniment.