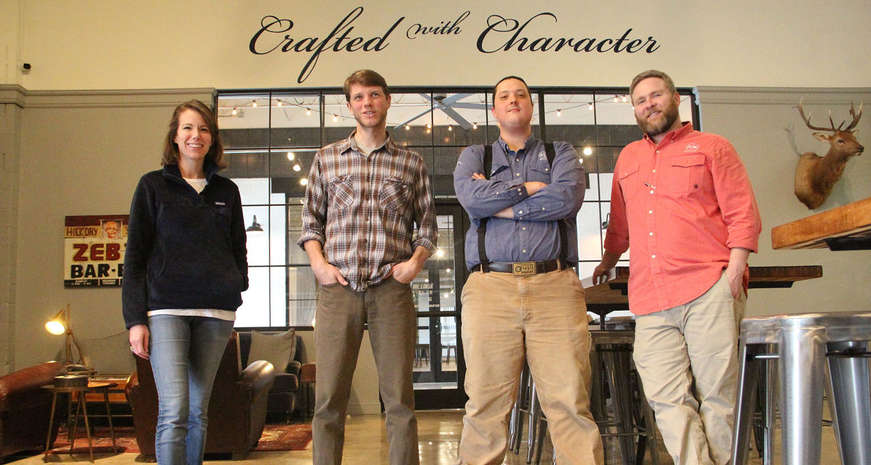 Justin Manglitz may have two giant copper stills made by Vendome Copper & Brass Works in Louisville, Kentucky, to work with at Atlanta-based ASW Distillery, but the “Head Distiller & Lead Fiddler” did not learn to make whiskey by simply pulling levers on big, shiny machines.

The native of Haralson County in northwest Georgia learned how to create spirits watching and eventually assisting his father, who made wine. His uncles even had a legal, tax-paying distillery before Prohibition.

By the time he moved with his family to Athens and started high school, Manglitz and his dad were masters of creating wine -- around 150-200 gallons per year, including cabernet sauvignon, zinfandel, petit syrah and more. As a student at University of Georgia, he developed a passion and became good enough at making his own booze that he decided to go into business, opening a small shop for home brewers after the Athens store he frequented closed down.

He says it was the best way he could think of to continue his experimentation, hone his craft and make “all the alcohol I wanted.”

“It’s really the only way you can learn,” Manglitz said. “There’s no book. There are schools in Scotland, which you can go to if you’re rich enough, although they get lost in technicalities and I’m not sure if they miss the overall art to it. You could have spent that year making and tasting whiskey on your own, figuring out what you did wrong by trial and error, batch by batch.” 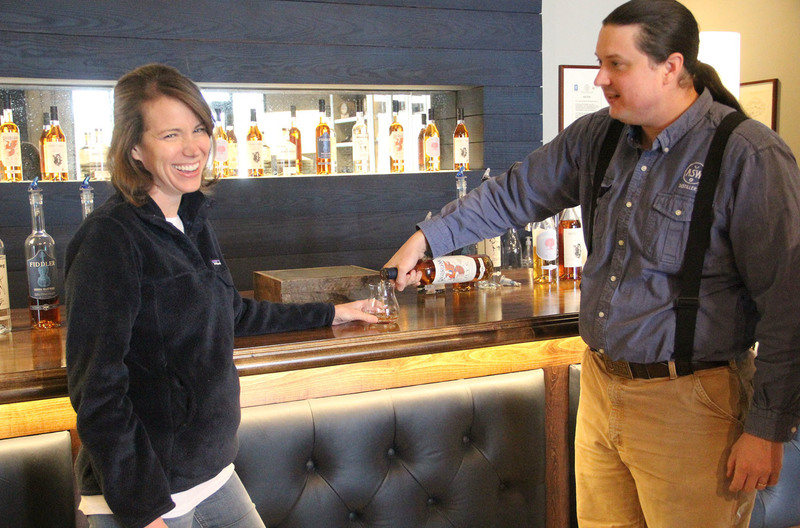 Manglitz clearly takes an artistic approach to his job at ASW Distillery, although he admits that production of spirits tends to be a fairly technical process. “On a day-to-day basis we get to do some fairly creative things, but the creativity aspect mainly comes in during product planning and design. For me, it’s thinking about how I would disill it, and with what types of malted barley and rye. As I get closer to actual execution, I think about the types of yeasts that I want to use, and what kinds of barrels, which is somewhat dictated by the government. Once I have an idea of the product I wanna make, the creative part is done. I put it into action in a fairly technical way, and after that it goes through the motions that allow the product to come to fruition.”

Those creative ideas might include alternating old and new barrels during whiskey aging, creating ASW's Armour & Oak apple brandy exclusively with apples from Mercier Orchards in North Georgia, and adding a port finish to ASW’s Resurgens Rye, which is made from a 100% malted rye mash and aged in charred white oak barrels. It is the first rye made in Atlanta since Prohibition.

“We let our brewmaster and [Manglitz] riff, and they came up with the entire recipe and process, which is pretty unique,” said Monday Night Brewing co-founder Jonathan Baker. “Our city is built on diversity and collaboration, so two beverage makers working together feels a lot more natural here in Atlanta than it might in other cities, where the focus is more on individualism.” 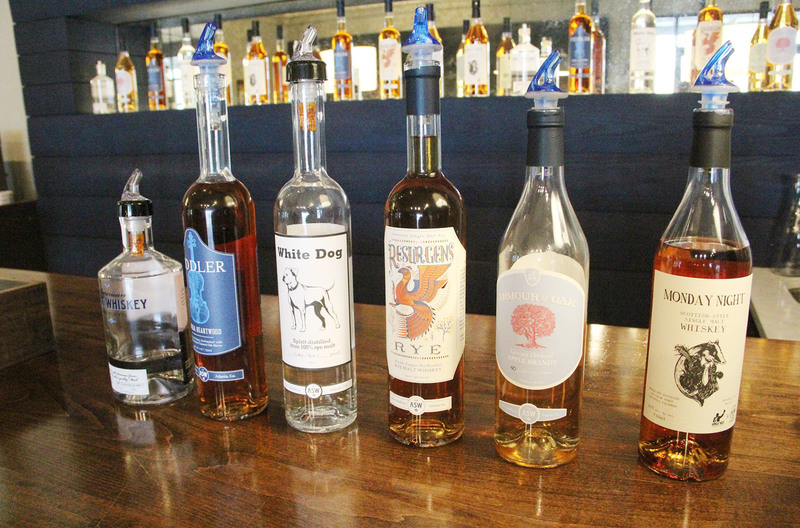 There are still individual challenges both companies face when it comes to making their product. Both companies have experienced the benefits and road bumps of being on the early side of Georgia blue laws, even as the state goes through a strong resurgence of locally made beer and spirits. In ASW’s case, they started in 2010 with the "white dog" American Spirit Whiskey, which for legal reasons had to be distilled in Charleston but whose production is expected to move to ASW’s Buckhead headquarters sometime in 2017.

Dealing with a sudsier set of blue laws on the beer side, Baker relates Monday Night’s experiences and restrictions to what ASW likely dealt with in getting started in a business dominated by distributors and huge beverage companies who operate in the state. “It takes a lot of patience, a solid business plan, and money,” he said. “Georgia is currently one of the least-friendly states to alcohol producers in the country, which means there isn’t much room for error as you’re starting up a brewery or distillery. You have to deal with all of the red tape and scale the business quickly before you run out of money. Most alcohol producers are able to sell their products directly to consumers, even if it’s only at their facility. These sales can provide much-needed cash in the early days. Growth in alcohol production requires significant capital, so the question is really around how quickly you can grow, given your access to funding.”

For Manglitz, who has a different set of pressures associated with his job than ASW’s founders (fellow UGA grads Jim Chasteen and Charlie Thompson), growth will be generated by making great liquor. Still, he’s always thinking of new ways to help get new spirits out to market, without losing quality or substituting the necessary flavors whiskey-lovers demand in a finished product. 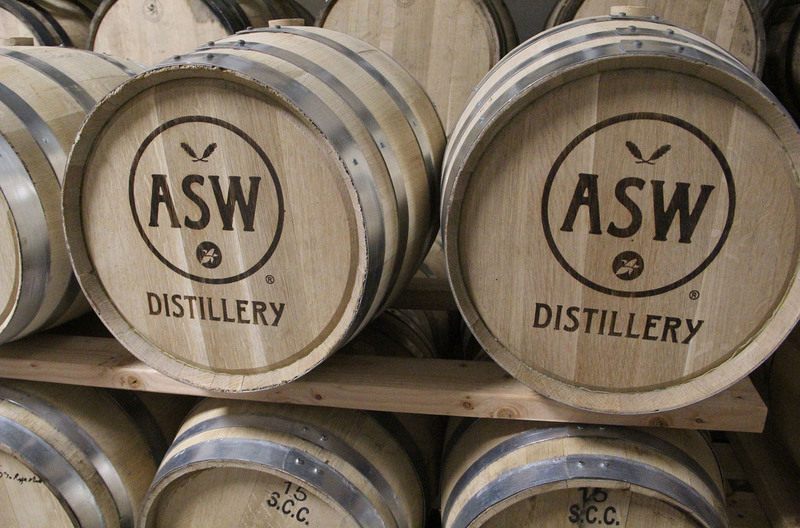 “The fact of the matter is, with a distillery we’re waiting for more time. We want our stuff to sit in barrels. That’s what most drinkers in the U.S. expect: a barrel-forward presentation on their whiskey. What I’m looking for,” he added, “is usually filtered through the reality that we’re not going to have 10 years to put it in a barrel, so I have to make spirits to put in a barrel that are gonna be good on their own.”

Manglitz specifically looks for body and viscosity in a pre-barrel spirit. He likes “thickness” and full-bodied whiskeys, and seeks complexity in the spirits he makes in those huge, 500- and 300-gallon, custom-built copper stills. The process is based on traditional Scottish single-malt distillation, but because the stills have American-style steam pans he can put actual grains in the still, whereas in Scotland they use steam coals and can only use beer wash with removed grains. “I take all the authentic things I love about Scottish and American styles and put them together. It makes it a little more challenging but produces especially delicious whiskey.” 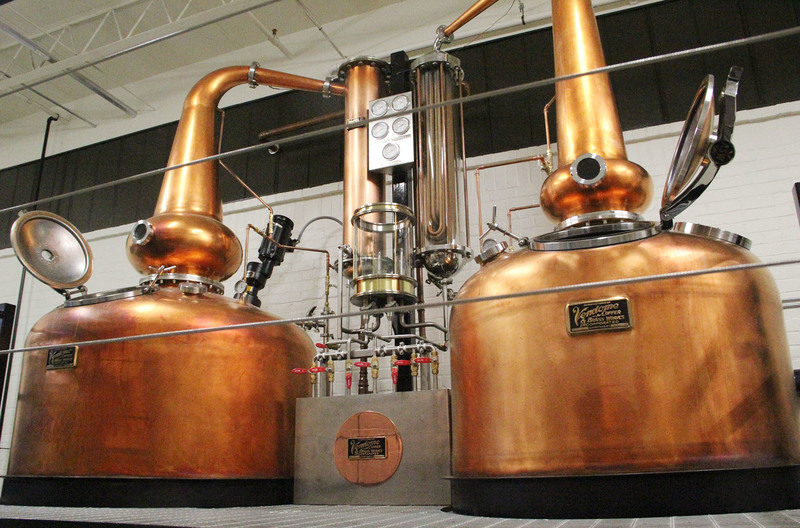 Manglitz boils solids for four hours to extract flavor. He says he can specifically remove any segment he wants using a batch process, which he admits is “less-efficient but a lot more precise” than using a continuous still. “Every distiller has a slightly different process,” he said, “even in Kentucky. It’s not that they’re not open about it, they’re just not all doing the same things. Distilleries have as many approaches as there are distillers.”

For his part, Manglitz has even found ways to draw inspiration from musical talent -- he also plays the fiddle -- when creating ASW products like Fiddler bourbon, which is a blend of whiskeys originating from around the globe, finished (or “fiddled with”) at the distillery and aged on Georgia-foraged wood.

“We have to do a lot of stuff to make people happy. With spirits you can’t just make an IPA, a brown ale and a stout; you have to do a few other iterations so that you can appease everybody. I think that we are trying to listen to what folks want, but push people towards what we like.” 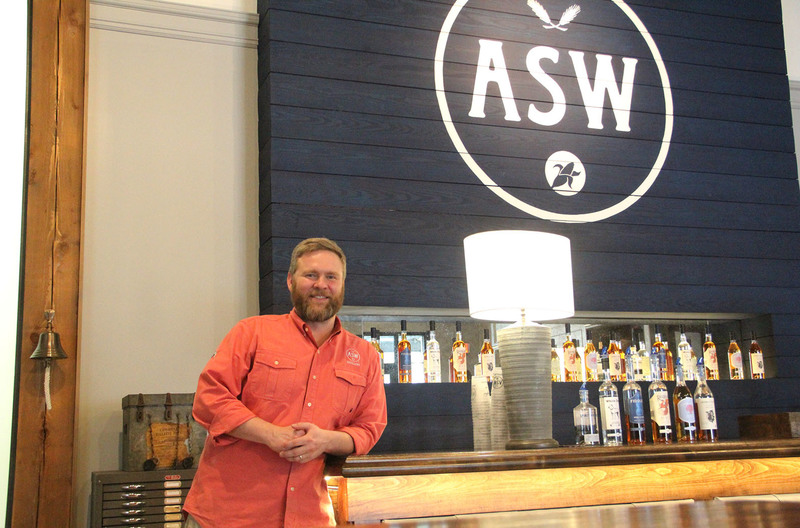 ASW has already exceeded their own expectations in terms of their popularity (“We can’t really bottle enough to even keep Atlanta in whiskey,” the distiller admits), but Manglitz is still very much aware of ASW’s Southern roots, as well as his own, and how they play a role in what he and the ASW team makes. By remembering to keep the spirit of ASW grounded in tradition, they're able to pay homage to the picky predilections of their consumers, even as they continue trying new things. And of course ASW Distillery is a completely legal and taxable enterprise, but it’s inspired by that same American Spirit for which they named the company’s flagship whiskey. It's that little bit of trouble-making, moonshining spirit that leads founders Thompson and Chasteen to call themselves "licensed bootleggers," and which Manglitz calls upon every time he reads gears and pulls levers on ASW's giant copper pot stills.