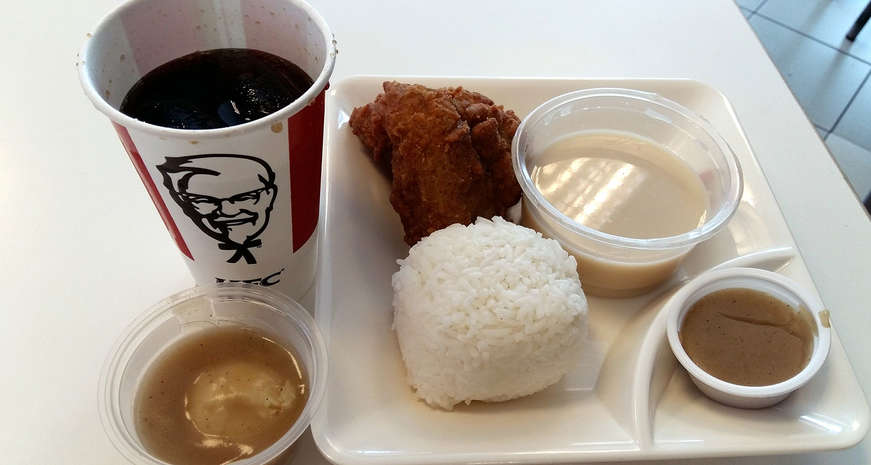 Over the past few years, Kentucky Fried Chicken’s marketing strategy has gifted us with a variety of celebrities stepping into the role of Colonel Sanders, as well as fried chicken throw pillows and even a $5,000 internet escape pod. Now KFC’s latest stunt takes on one of our favorite things to pair with fried chicken: gravy. But instead of adding it to mashed potatoes, KFC is suggesting you sip a cocktail made with gravy.

That’s right, KFC now wants the world to drink gravy cocktails. The company released a video this week showing how to incorporate gravy into three different beverages: the Gravy Mary, a twist on a classic bloody mary and garnished with popcorn chicken; the Fingerlickin' Sour, made with mezcal, cherry liqueur, egg white and gravy; and the Southern Twist, made with gravy, brown sugar and Kentucky bourbon.

In the clip, before a bartender makes an impressive gravy pour — from a gravy boat — into a glass, a voice in the video states: “An old bartender once told me a good drink needs good liquor, while I told him that a great drink needs gravy. Gravy cocktails. Gravy so good you can drink it.”

The Southern Kitchen team had very mixed feelings while reading this story. At first nobody was on board with adding gravy to their cocktails. In fact, most of our team started off hating these cocktail creations.

For me, the idea of pouring gravy on anything but mashed potatoes is unappealing. Mixing it with mezcal makes my stomach flip. Associate Editor Kate Williams, who has been under the weather this week, was also grossed out.

Associate Editor Mike Jordan was on board with the idea of a gravy cocktail, if the “gravy wasn’t ridiculously thickened.”

We won’t deny we all like gravy, but the thought of mixing it with alcohol just didn’t sound like something we wanted to try. Southern Kitchen’s Chief Merchant Sean Pruett said:

As the conversation continued, Mike challenged the team to open their minds and explore the flavor combinations that could go well with gravy in a cocktail. He suggested using a thinner herbed gravy to make a drink savory. As for other flavor additions he and Kate suggested lemon, brown sugar, sage and of course, bourbon.

Keeping with the bourbon theme, Kate suggested creating a gravy version of the maple bourbon smash, but shaking it like in a pisco sour.

“My thinking is that for sours, you typically add egg white to give the drink body. You have to shake the drink vigorously in order to basically whip the egg whites to get them to incorporate into the alcohol,” Kate said. “I'm guessing that gravy would be the same since it is so protein-heavy. You can say that you'll want to shake it for at least one minute, or until the mixture is creamy and homogenous.”

Really the only cocktail I could get behind was the "Gravy [bloody] Mary", as it’s already a savory drink. KFC’s Gravy Mary was garnished with popcorn chicken, but we thought a piece of fried chicken skin would be a better choice.

Mike and Kate also suggested using the deglazed drippings, “the stuff you make before you go making gravy,” to wash vodka before adding it to your own bloody. Another way to use the gravy-washed vodka is in a modified version of a Bullshot. In their recipe, cocktail site Supercall swapped out “the original’s beef bouillon for Thanksgiving turkey stock, but keeps the Worcestershire and adds a dash of cayenne to give the bird a spicy bite.”

Ultimately, while the initial reaction was one of horror, KFC’s gravy cocktails got us thinking about how far people are willing to go when it comes to creating cocktails, and resulted in some ideas about how we could make improvements. We started out skeptical, but we realized the right mix of flavor profiles isn't that far out there.

And to be sure, it’s not something we would drink every day, but a gravy cocktail at Thanksgiving doesn’t sound as weird to us anymore. Needless to say, after this discussion, even I found myself slowly stepping aboard the gravy train.