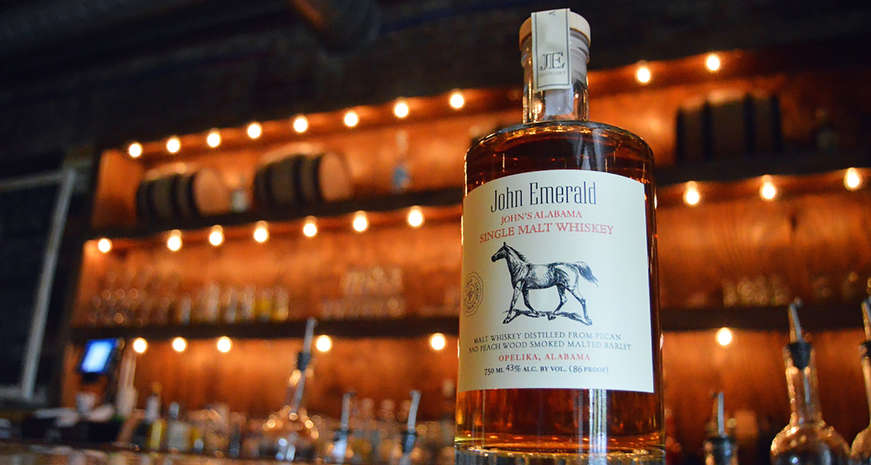 How Alabama's first whiskey distillery since Prohibition got started

The South may be famous for its bourbon, but for the better part of the 20th century Southern states have not really been friendly to the (legal) production of any spirits. Some states, like Alabama, are still playing catch-up. Read on to learn about John Emerald Distilling, the first distillery to open in that state since prohibition.

In 2014, one year shy of the 100th anniversary of Alabama’s longest statewide prohibition of alcohol, John Emerald Distilling Company opened its doors. As the first whiskey distillery in the state since 1915, John Emerald makes everything from vodka and gin to spiced rum and muscadine brandy, but it is best known for its singular spin on single-malt whiskey.

Family is at the core of John Emerald, which is owned and operated by father-son team John and Jimmy Sharp. Through their products they honor their ancestors, naming their Hugh Wesley’s gin and Elizabeth vodka after Jimmy’s great-grandparents, and the company itself as well as their single malt whiskey are named after Jimmy’s grandfather, John Emerald Sharp. The co-founders are already looking forward to the day Jimmy’s daughter and son will take over the business, and are working hard to establish a reputation for the company that will become an enduring legacy.

Watch our video, below, to get a closer look at this game-changing distillery, and don't forget to plan a trip the next time you're in Alabama.