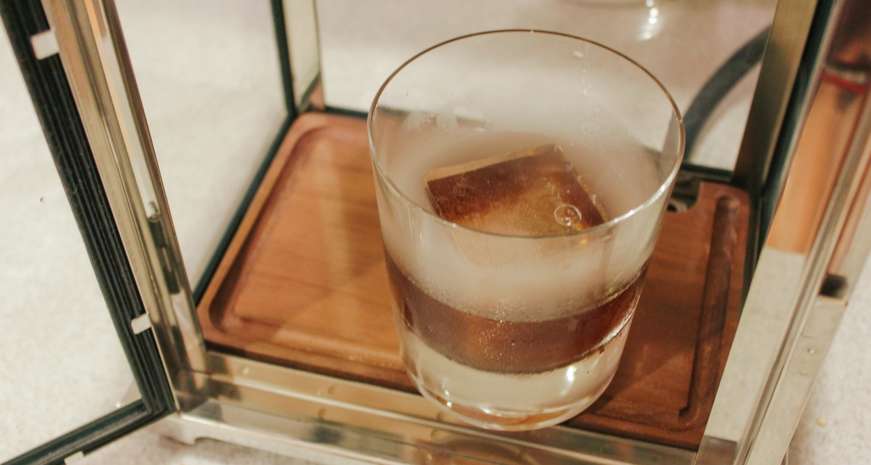 A few months back, our Chief Merchant, Sean Pruett, told me about the Crafthouse by Fortessa Glass Smoke Box. Before our conversation was over, I’d already ordered one for myself from the Shoppe at Southern Kitchen. The smoke box seemed too cool not to have, especially for those who enjoy making cocktails as much as my husband and I do.

I’m sad to report that since then, my smoke box has gotten very little use, aside from a few merchandising photo shoots for Southern Kitchen. To be honest, I didn’t know what to make in it or if what I did make would even benefit from the addition of smoke.

In order to correct this underuse and discover the true potential of the smoke box, I decided to take on the trial and error in my own home, along with the help of my husband, Josh, who is a much better cocktail crafter than I — and an important character in this story. Here’s what I learned, here’s what we made, and here’s the final verdict on whether or not you need a smoke box.

First, here’s what you need to know about the smoke box: Each comes with a handheld smoker, two small jars of smoking chips (apple and cherry) and the glass smoking box itself. 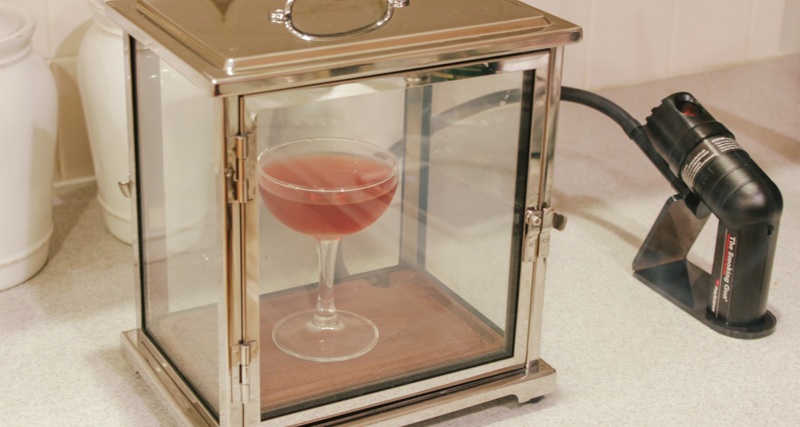 Cocktail 1: Negroni Part 1
Given that I had no idea what I was doing, I decided to start my journey off with a simple Negroni — a classic cocktail made with equal parts gin, vermouth and Campari. I used an Old Tom gin, which is sweeter than a London Dry. Why? Two reasons: First, I thought a sweeter gin might play nicely with the apple wood and second, I saw something on the internet that made me think this was a good idea. And if the internet says it’s a good idea, it probably is, right?

I made my cocktail, added a pinch of apple wood, fired up the gun and let the smoke fill the box for about 10 to 15 seconds. I opened the glass box, tasted my first smoked Negroni and … was underwhelmed. There was a hint of smoke on the nose, but it didn’t add enough to the cocktail to make it worth the effort. My guess is that I didn’t smoke the cocktail long enough and that Old Tom gin wasn’t the best choice, as it already has so much of its own flavor. Feeling a bit discouraged already, I told my coworkers about my first cocktail. They encouraged me to try again with a different gin.

Grade: F
I suspect it was my fault, not my beloved Negroni’s or the smoke box.

Cocktail 2: Negroni Part 2
When you fall off the horse, you get back on. For my second attempt at smoke box glory, I tried another Negroni, this time with Plymouth gin. I’ll cut to the chase — it was fine. There were some light smoky notes on the palate and the Plymouth gin definitely held the woodiness on the nose longer than the Old Tom did. Still, I was underwhelmed and started to consider that maybe this endeavor was a bad idea. I’m neither a great bartender nor a scientist, and I really didn’t want to waste my liquor cabinet supply by blindly smoking random cocktails with obscure flavors.

With this self-graded C minus in cocktail smoking, I started harassing Josh about my options. Should I smoke a margarita? Can I smoke citrus? What would happen if I smoked rosemary? What about chai tea? After hemming and hawing for a bit, we decided to move away from the gin drinks and into tequilas and whiskeys.

Grade: C
The C is for effort, but I’m not convinced that the light smokiness is worth the extra step between you and your first sip at happy hour. 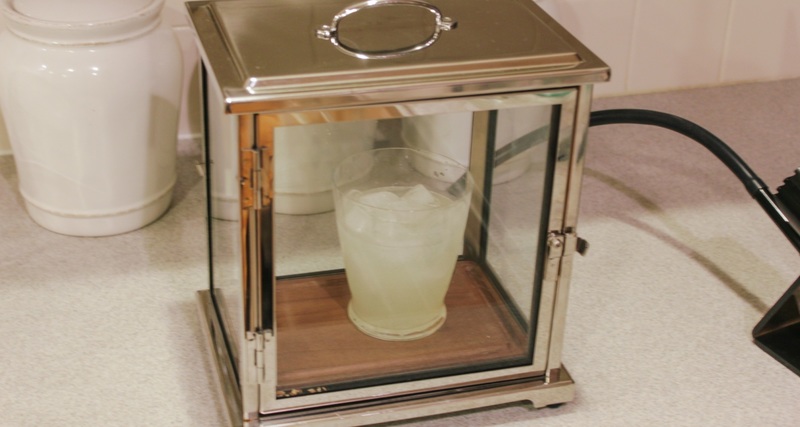 Cocktail 3: Margarita
Spoiler alert: This where things really started to get interesting. We took a turn south to the border, heading straight for Mexican tequila. I decided to smoke our Agave Margarita with dried rosemary, for no other reason than that Josh said it “felt right.” And it did, especially after letting the drink sit for a few minutes. The smokiness was very present on my palate both up front and at the finish. It permeated through my taste buds and settled on my tongue, combining nicely with the citrus and bringing out some of the smoke in the tequila. 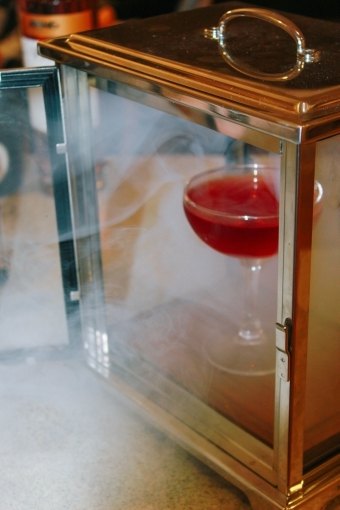 Cocktail 4: Boulevardier Part 1
A Boulevardier is a cousin of the negroni that swaps out gin for whiskey. For this first drink, I used W.L. Weller, a sweet wheated bourbon and Carpano Antico Formula, which has a smooth vanilla flavor that typically plays nicely with Campari. I smoked the cocktail with cherry wood, and — holy smokes — it was the most cherry-flavored drink I’ve ever had! The sweetness of the bourbon, plus the vanilla in the sweet vermouth, the Campari and the cherry wood equaled a cherry explosion. It wasn’t horrible, but it did taste a little bit like cough syrup. “It tastes like someone poured grenadine into the glass,” said Josh. The lesson we learned here is don’t overload with sweet liquors, because the sweet smoke only enhances it.

Grade: B
Sweet wheat is not the way to smoked Boulevardier stardom.

Cocktail 5: Boulevardier Part 2
Life (and cocktails) is about learning from our mistakes, right? A sweet wheat bourbon was wrong in a smoked Boulevardier, so instead I decided to try a spicier rye whiskey, which I figured could stand up to the cherry a bit better. What I learned along the way is that you have to try lots of variations on the same cocktail, very similarly to how one educates onself on the intricacies and flavors of wine varietals. We used Rittenhouse Rye for Boulevardier part 2, plus a homemade vermouth that had notes of citrus and lavender. Adding the cherry smoke was a pleasant accompaniment to the deeper, richer, nuttiness of the Rittenhouse, creating a warm and cozy cocktail. The sweetness from the cherry and the brightness of the vermouth was a much better marriage compared to the sweet vermouth in Part 1, which resulted in our too-sweet cocktail.

Grade: A
This is what I'd been waiting for! Smoking the cocktail was completely worth it, and the smoke flavor was present but not overpowering. I almost felt like I could exhale a puff of smoke after every sip. I wanted to snuggle up by the fire and sip on it all night. 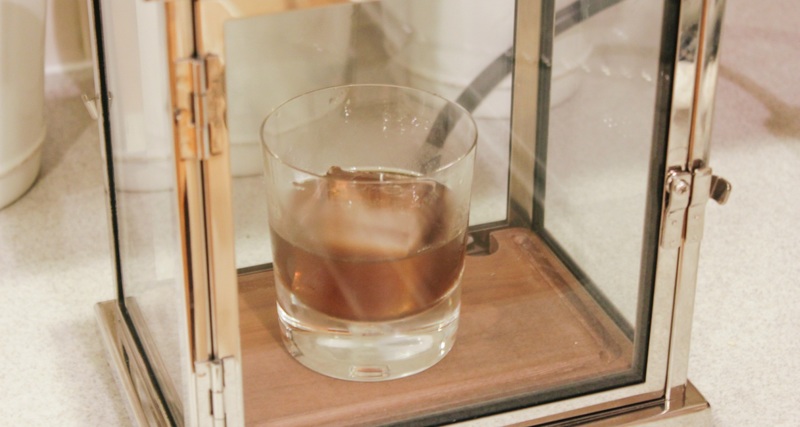 Cocktail 6: High Noon Old Fashioned
Josh made the High Noon Old Fashioned, but didn’t flame the orange to help the flavors of the whiskey and bitters come through even stronger. We paired this drink with apple wood and wow — not only was it really cool that the smoke floated in the glass for a minute, but it also naturally balanced the flavors from 18.21’s Havanna and Hide Bitters. The smoke brought out the oak and wood flavor from the barrels in which the whiskey was aged. If this is your first time drinking this cocktail (and not your hundredth, like us), you would think that smoking it was just how the cocktail is supposed to be made. “It’s hard to tell where the smoke from the smoker ends, and where the smoke from the cocktail begins,” said Josh.

Grade: A+
We totally bested the smoke box and should get some kind of award. Seriously, though, smoking this cocktail made the drink better, hands down. In fact, I’d recommend that this drink is always smoked. The freshly infused smoke revitalizes the smoky flavors existing in the cocktail. Smoke doesn’t alter the drink, but rather enriches it. This is by far the best cocktail we tried.

So, what’s the verdict on the smoke box? Aside from being showy and cool — which it totally is — it’s an elegant way to smoke all kinds of things without a torch. Josh pointed out, “The smoke box adds a nose to a cocktail that is beyond reach any other way.”

While it is a bit of a novelty, the smoke box is definitely worth experimenting with if you enjoy playing around with flavors and trying new cocktails. The smoke is intended to add a depth of flavor to the cocktail, but remember that the smoke is fleeting. It only lays on top of the drink as an additional layer; this smoking gun doesn’t infuse smoke the way a full-on smoker would. The only major con of the smoke box is that it’s a bit noisy when the gun fires up, but that’s not enough of a purchase deterrent, especially if you enjoy entertaining and experimenting with flavors.

In addition to the apple and cherry wood that comes with the box, there are several flavors that are worthy of smoking. Consider teas, cinnamon, cloves and herbs like thyme, sage and rosemary. You won’t know until you try! I also recommend starting with flavors and cocktails with which you’re familiar, so you can try several variations. Don’t limit yourself to just cocktails, either; try smoking your charcuterie or cheese board, too.

Final Grade: A-
The Crafthouse by Fortessa Glass Smoke Box is a fun and worthwhile addition to your home bar, both to entertain guests and to experiment laboratory-style on a quiet night at home. It was exciting to watch the transformation of some of our favorite cocktails and see what worked and what didn't. The ritual of smoking added to the overall experience of the cocktail. The smoke box is a fun and unique piece of barware, and a great gift for the home bartender or hostess in your life. 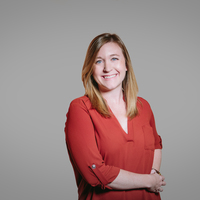