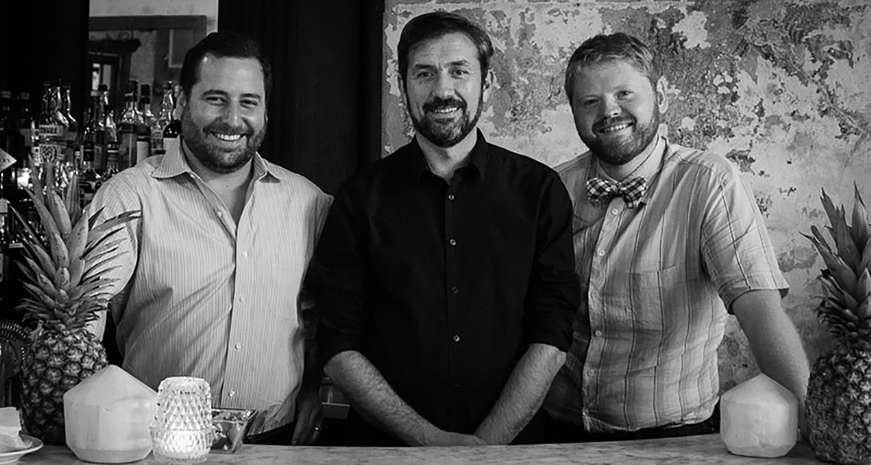 There are plenty of borderline ancient bars in New Orleans, but none may be so full of history as the building that houses the bar Cane & Table, which has gone through as many iterations as the city itself. Learn more about the bar and its tiki-inspired rum drinks, below.

The three-story structure which houses Cane & Table, which was built in 1818 on the southern edge of the French Quarter, can tell at least as many literal stories from its own past lives.

It’s been a dormitory for the nuns of the old Ursuline convent, located just beyond the back wall. It’s been a horse stable, a brothel and a fruit stand. It's sustained damage from a fire and been raided by the police for solicitation as recently as the 1950s. An unassuming sandwich board listing daily specials greets your arrival at this prototypical tiki bar and restaurant, which opened in July 2013 and embodies the history of New Orleans in its food and drink.

The moody, rectangular interior is dimly lit by a few chandeliers and votives, which cast long shadows along the centuries-old brick walls leading out to the private courtyard. A black, painted ceiling gives the illusion of a much larger room, half of which is taken up by the crescent-shaped bar. 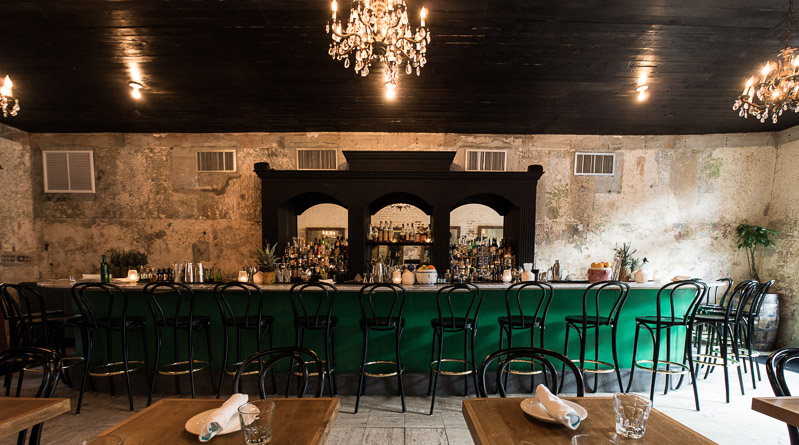 The only natural light comes from two French doors facing Decatur Street, which teems with tourists seeking to drink in the Quarter’s sensuality but who might be unaware they’ve passed by one of the city’s best rum-inspired cocktail bars.

Owner-bartender Nick Detrich and partners Neal Bodenheimer and Kirk Estopinal bought the building in fall 2012 from a friend who was “getting out of the bar business.” Their goal was to fulfill Detrich’s dream of owning a tiki bar so that he’d be able to showcase his love of history and rum, but these plans were amended when word leaked that tiki-phile and tropical drinks expert Jeff “Beachbum” Berry was already set to open his highly-anticipated tiki bar Latitude 29 on North Peters a half mile away. 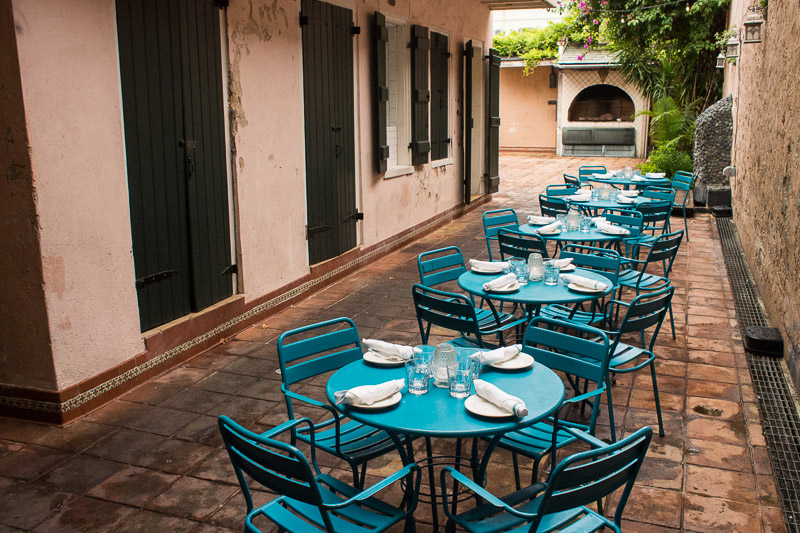 The team hired native New Orleanian Matt Kohnke to redesign and renovate the space which Detrich describes as “a Soviet bar covered in eastern block graffiti” and reflected lower Decatur Street’s 1990s nouveau-punk days. As Kohnke stripped the bar down to its bare bones, the partners realized Matt’s vision for the historic building would help shape Cane & Table’s future. “He transformed it into an old dining room, like many you see in New Orleans that have been around forever, like the Napoleon House,” Detrich recalled. “The transformation, from sheetrock and gaudy plaster to the exposed brick walls and beams on the ceiling, was remarkable.” 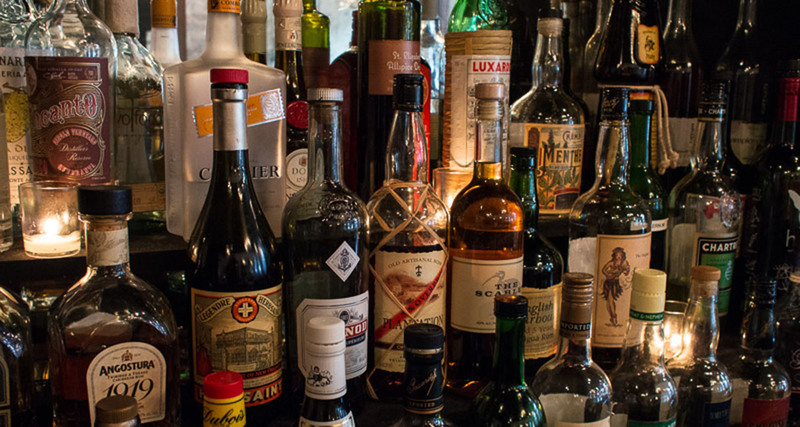 Detrich says his cocktails are inspired by a variety of historical sources and studied the history of the New Orleans rum trade prior to the bar’s opening. “Rum plays a huge role in New Orleans’ and America’s histories,” he said. “It was used in trade in the colonies, given to sailors in lieu of water, mixed in punch in Colonial taverns and inspired the tiki movement of the early 20th-century,” Detrich explains.

“The only time you see rum take a back seat in cocktails is during the Jerry Thomas era.” Thomas, who has been called the “father of modern cocktails,” literally wrote the book on the subject in 1862, with his compendium The Bartender’s Guide: How to Mix Drinks. 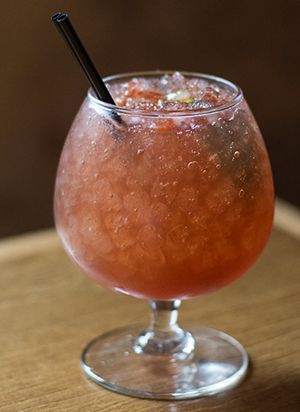 Cane & Table’s cocktails are a clever mix of 1930s tiki, Thomas’ classics, and recreated Colonial drinks and punches: flips, sours and cobblers blend together with sazeracs, old fashioneds and daiquiris reinterpreted for the modern drinker. There’s no shortage of banana and pineapple on the menu, or spices and falernum, which would have been imported alongside rums from Martinique, Jamaica and Cuba into the port of New Orleans.

The menus, which change quarterly, are a retelling of our country’s earliest drinking habits. “When we first opened, I would use old Victorian travel logs to get ideas. Before the well-to-do gentleman would take over the family estate, he would travel the world. Sometimes these gentlemen would write books about their travels and include the places they ate and drank.”

A recently retired menu included reimagined drinks of founding fathers like Thomas Jefferson and Ethan Allen, while the current menu had Detrich and his staff researching early agricultural trade exchanges, such as those negotiated by New England settlers who learned from Iroquois to tap maple trees for syrup. 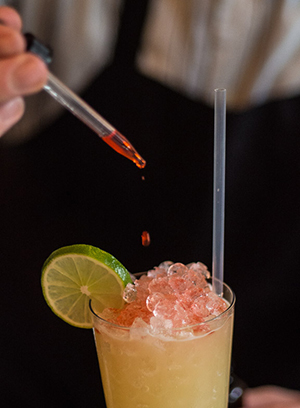 The resulting drinks are less direct reproductions and more interpretations of historical events, and he says they’re continually building cocktails around stories.

“It’s fun for our staff to learn and research,” Detrich said. “It gives them real ties to the cocktails they are creating for our guests.”

Whenever you next find yourself on Decatur street while strolling the French Quarter, step out of the harried streets of 21st-century New Orleans and into Cane & Table, where you can experience one of the city’s past lives through what made the French Quarter famous: its cocktails.

The life you choose may depend on the drink in your hand, but whatever your endeavors include, may they always lead you to and from good rum.

Instructions
Peel the oranges, reserving both the peels and the fruit separately.

In a punch bowl, mix the peels with the sugar and nutmeg. Let sit at room temperature until the sugar is clumpy and aromatic from extracting the oil from the peels, at least 1 hour. Juice the oranges into the bowl. Mix in the beer, rum and water. Use a slotted spoon to remove the orange peels.

Serve over plenty of ice.